The New York Times is in on the fix to cheat Republicans out of a win. Photo supplied
Washington

Evidence mounts of a stolen US election

Americans are experiencing a well designed and successful coup against American democracy and accountable government and this is not a conspiracy theory, says Paul Craig Roberts. "It is a revolution against red state America."

United States Air Force Lieutenant General Thomas McInerney explains a special software developed by the National Security Agency that can be used to alter vote counts in elections. He explains the software and its use in this 7 minute video.

In this article, the Off-Guardian explains the use of the software to alter the outcome of the vote in Wisconsin and Michigan.

In this article the Fake News Site, CNN, attempts to explain away the obviously altered vote. 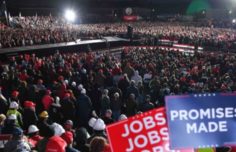 President Donald Trump addressed tens of thousands of supporters at a rally on Saturday evening, Oct. 31, in Butler, Pennsylvania, ahead of Election Day on Tuesday. Twitter

Voting by mail greatly facilitates the use of the vote-altering software and the use of ballot dumps. One reason for the mask mandate and Covid fear was to justify mass voting by mail.

The media speaks with one voice. The print, TV, NPR, social media, and the anti-Trump Internet sites exercise censorship and control the explanations.

We are experiencing a well designed and successful coup against American democracy and accountable government.

No, this is not a conspiracy theory. It is a revolution against red state America.

Republicans are too establishment to effectively fight back. They fear that exposing and resisting a stolen election would discredit American democracy. In effect, patriotism makes them impotent.

Republicans should think instead what it means to be governed by a President covered in criminal scandal who also seems to be suffering mental confusion and is likely for one or both of these reasons to be moved aside. If Kamala Harris becomes president, we will have in the Oval Office a female of color who hates white people and is vindictive against them.

The Democrat Party is now in the hands of indoctrinated leftists who despise the working class and champion “oppressed minorities.” Immigration floodgates will be thrown open. Red states will be cut out of the federal budget. Gutsy Republicans such as Devin Nunes and Jim Jorden will be falsely investigated, and Trump will be falsely prosecuted. The rest of us will be silenced in one way or the other.

Over 1 million people requested tickets for Donald Trump’s rally in Tulsa Oklahoma. People were camping outside for days to see Trump. This was Biden’s rally. Only few people showed up. Biden’s campaign staff blamed non-existant Covid restrictions. Why does a British public news service, the BBC, have a “Fact Check Team” to protect an American political party? Is the campaign against red state America organized globally? Twitter

Think about how unlikely the Biden/Harris ticket is for success. Everyone knows that Biden suffers mental confusion. His campaign events were barely attended. Harris had so little support in the Democrat primaries that she was the first to drop out. Even the Democrats didn’t want her; yet she ends up the Democrat VP choice. Americans watched as Democrat regimes in Minneapolis, Seattle, Portland, Chicago, New York, Philadelphia, Atlanta, and other cities responded to rioting and looting by hampering and defunding the police.

How can such an unattractive party whose elected officials refused to enforce law and order win the presidential election?

The answer is fraud.

Whether or not you believe this report from a US Postal Service employee that he was ordered to backdate late mail-in ballots in Michigan, it serves as an example of how easy voting by mail makes vote fraud.

The threat posed to democracy by the software described by General McInerney is devastating. With such software in the hands of intelligence services, every election in every country can be decided behind the scenes.

This makes it easier for elites to rule. The vote altering software turns democracy into a cover for self-interested rule. Yes, elites have always tried to purchase elections, but now they can program them.

I have often written that the digital revolution was the greatest threat humanity faces. Proof piles up every day.

It is amusing to watch the press prostitutes try to cover-up vote fraud for the Democrats. Here is an example from the bought-and-paid-for BBC whose “Reality Check Team” has undertaken to “fact check” the “rumor” of a 138,000 sudden ballot dump for Biden in Michigan during the early hours of morning when no one was watching:

Note also that the exact same thing occurred in neighboring Wisconsin at about the same time. So we had two simultaneous “data entry errors” in two critical contested states that wiped out Trump’s lead? How likely is that?

Note also that correcting the “data entry error” did not result in the reappearance of Trump’s lead. So how was the error corrected?

It shows how utterly stupid the presstitutes are that they report that a data entry error that erased Trump’s lead was “corrected” but the lead remained erased!

Why does a British news service have a “Fact Check Team” to protect an American political party? Is the campaign against red state America organized globally?

Note two other anomalous vote patterns. In the critical swing states, the Democrat votes for senators do not match the votes for Biden, and despite what seems to be a record Democrat turnout the Democrats lost house seats in the election! What explains the absence of “down the ticket” voting in Democrat House and Senate voting? Fraud in the Biden vote is an obvious answer.

Trump Legal Adviser Jenna Ellis Discusses Magical 138,000 Michigan Biden Votes that Appeared Out of Nowhere in the Middle of the Night (VIDEO)

What is Going On? Minnesota and Wisconsin BOTH had 89%-90% Turnout — Something That Is Highly Unlikely