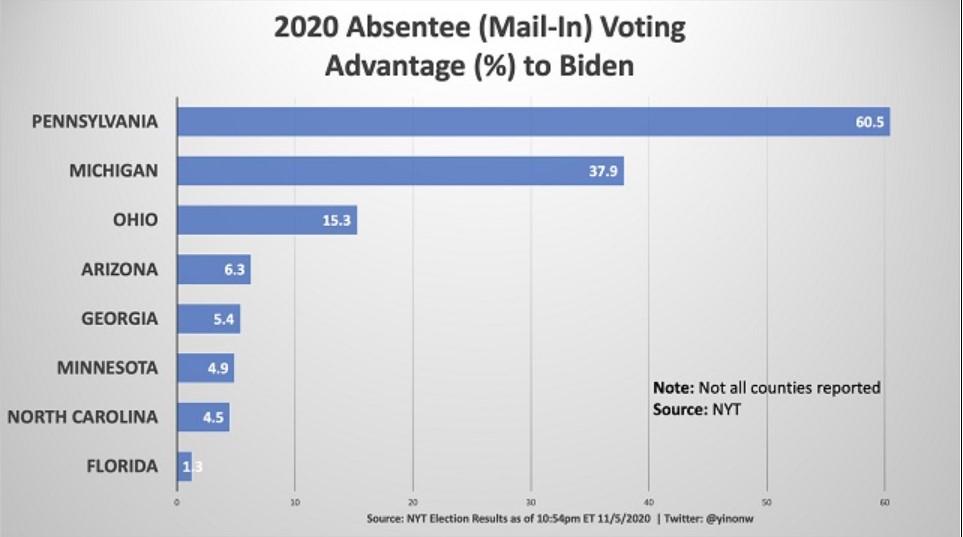 According to data compiled before the weekend Biden received no similar highly suspicious advantage in other swing states like Ohio, North Carolina, Florida or Minnesota.

These are some astounding absentee voting results.

Joe Biden is +57.7 in PA and +37.9 in MI, compared to being up only single digits in absentee voting in most other battleground states. WI is not reported, but would be interesting. Source is NYT. pic.twitter.com/DPRiJpj3mz

Michigan’s results are all the more shocking considering that Republicans had requested more mail-in ballots than Democrats (41 Republican, 39 Democrat, 20 Other), according to data shared on NBC News.

Michigan GOP chairwoman Laura Cox announced on Friday that widespread use of faulty software that mysteriously switched 6 000 votes from Trump to Biden had been discovered in just a single county. There are 47 counties in the state that used the same software to audit their votes and the same error may have been replicated in all counties, said Cox speaking at a press conference.

“In Antrim County, ballots were counted for Democrats that were meant for Republican causing a 6 000 vote swing against our candidates,” Cox noted. “The county clerk came forward and said tabulating software glitched and caused a miscalculation of the votes. Since then, we’ve now discovered that 47 counties used this same software in the same capacity.”

“These counties that used this software need to closely examine their result for similar discrepancies,” she added.

In a similar incident, GOP chairwoman Ronna McDaniel said that in Rochester Hills, 2 000 ballots were discovered on Thursday night that went Biden when they were marked for Trump, due to a “clerical error”.

McDaniel also underscored the many irregularities reported at other ballot counting locations, including election workers adding backdated postdates. She urged state officials to be transparent and demanded an audit of the vote. “This is our democracy,” McDaniel stated at the press conference.

“To see people not be able to observe in Democrat run cities across the nation is not OK. We need to pursue these irregularities and we need people to be patient and give us the time to investigate. These are serious allegations of changing the date on ballots and refusing to let people observe in a meaningful way an election of this magnitude.”

Curiously, all the “glitches“, so-called software errors and fake-dated ballots have only advantaged Biden so far.

A statistical impossibility in and of itself. Strange that no one is ever curious about that trend. https://t.co/RrzO5cXIz4