Sweden's new Minister of Civil Affairs Ida Karkiainen has admitted to having posed with a Nazi salute when an old photograph of her surfaced greeting Hitler. The setting was a White Power party that she had hosted with a friend.

“I am completely sure, I have no skeletons in the closet,” Ida Karkiainen told Aftonbladet when it became clear that she would be named Minister of Civil Affairs in Magdalena Andersson’s new Socialist government.

Nyheter Idag revealed that Karkiainen made a Hitler salute to White Power music at a private party in the mid-2000s and was captured doing so. Many people in her hometown remember her involvement in the far-right scene.

According to information from the newspaper, Ida Karkiainen and her boyfriend at the time used to host White Power parties in their apartment in Haparanda. A source confirmed that the pair “saluted and screamed ‘Sieg Heil’ from their balcony” in the early morning hours.

“She’s just thinking about her career. I think she would join any party, as long as she advances her career. It is damn hypocritical to say that to Aftonbladet when a lot of people in Haparanda know about her background,” a source for Nyheter Idag commented when asked about Karkiainen’s claim that she had no “skeletons in the closet”.

Karkiainen has been struck with selective memory loss. To SVT Nyheter Norrbotten, the Socialist minister said that she has no memory of having made a Hitler salute.

“If it is the case that I have done it, then it is an attempt to ironize that type of ideology,” she explained. She also claimed that she had never frequented the White Power milieu.

“They may have been playing Ultima Thule and that kind of music in those contexts, but in that case I went and turned it off and said that it was not okay. Young people listened to Ultima Thule in the 90s, it was not unusual,” Ida Karkiainen told SVT.

“I have always been confident with my opinions and stood up for the equal value of all people,” she added.

Karkiainen then repeated her claim in a written comment to TT: “I have no background in the White Power environment and have no memory of having made such a gesture.”

Swedish PM has ‘full confidence’ in the ex-Nazi

Despite the inconsistencies in Karkiainen’s statements, and witness accounts of her involvement, the new Swedish Prime Minister Magdalena Andersson expressed “full confidence” in her new Minister of Civil Affairs. 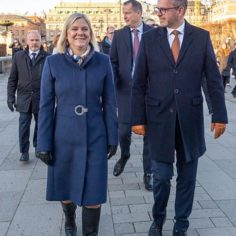 New Swedish Prime Minister Magdalena Andersson (left) does not seem to mind having a White Power adherent in her cabinet. Wikipedia

Andersson responded to the minister’s Hitler salute by stating: “Such gestures not only deeply lack background but are also extremely inappropriate. I have spoken with Ida Karkiainen about this, but I have full confidence that this is not something that reflects her values ​​and she herself has been very clear about that.”

The prime minister said at a press conference that she would continue to have full confidence in her new minister.

Ida Karkiainen has told TV4 that she grew up in Haparanda and that at parties they sometimes played White Power music, but that she herself had never been a supporter of this. Her confident Nazi pose in the photograph does not support her claim however.

Expressen, another Swedish outlet, has meanwhile accused Karkiainen of engaging in “wild partying” during the Sabaton Open Air Festival 11 years ago. But these reports have left Karkiainen equally unphased.

“It’s tricky if you were to delete something like that, it has been out for ten years and now suddenly it gets deleted? I have always been disciplined and found out things for myself. What the guys were doing and how wild the parties were that they held is up to them, but I have kept my composure,” Karkiainen told Expressen. 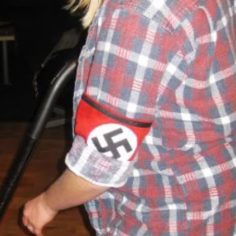 Catharina Strandqvist was thrown out by her party, the SD, after an international smear campaign was launched against her and the party. This week the Socialist Party welcomed the White Power Hitler salute as part of youth spent in ways that are not dull and ‘boring’. Photo: Private

This contrasts particularly starkly with the treatment of a young Sweden Democrat (SD) woman ahead of the 2014 election: After being photographed wearing a swastika armband, a top local candidate for the anti-immigration party had to step down.

Catharina Strandqvist, a candidate for the county and municipal councils in Halmstad, admitted that she had worn the armband for a burlesque party and apologized for the “inappropriate joke”, reported news agency TT.

Socialists who had previously harshly denounced Strandqvist, have now spoken out in Karkiainen’s defense. Several have said that they also used to salute Hitler as teenagers and that this was a trivial issue.

One of many who believe that it is unnecessary to criticise Ida Karkiainen is the left-wing academic Carl Melin, who noted on Twitter: “If it is disqualifying as a politician to never as a teenager have been to a party where things have been done and said that are stupid and/or you are ashamed of, well, yes, then our country would be governed by dullards who had the most boring youth.”

But Strandqvist was hounded by leftwingers at the time, and the “incriminating” pictures of her spread like wildfire in the Swedish media and also attracted international attention.

The same Carl Melin denounced the Sweden Democrats for not having “thrown out” Strandqvist in 2014. “In what party other than SD would a representative wearing a swastika not be thrown out,” he complained.

Strandqvist not only had to resign her candidacy due to the smear campaign, but was also forced to take a “timeout” from her job as an assistant nurse at a municipal service building in Halmstad.

The municipality justified their decision by saying that the elderly at the accommodation were “afraid” of the 20-year-old blonde nurse because of the photograph.

Lotta Olesen Rosén, section chair for Kommunal Sydväst, told P4 Halland that she understood the municipality’s actions, given that Catharina Strandqvist did not seem to believe in “everyone’s equal value”.