Retired Turkish Rear Admiral Ali Deniz Kutluk said the constant expansion has turned NATO into a cumbersome and unmanageable organisation. The discussed inclusion in the North Atlantic Alliance of two more countries – Finland and Sweden – will make the structure even weaker, and ultimately more dangerous for current members.

“Is NATO expansion right? Already the alliance is unmanageable. It has 30 member states. In addition, it has 39 countries that are called partners. Will the inclusion of these countries [Sweden and Finland] in NATO provide greater security or reduce it even more?” The Aydinlik newspaper quoted Kutluk as saying.

The accession of Finland and Sweden to NATO is not beneficial for Ankara. “Why would Turkey agree to a situation that would reduce its own security?” the retired military man added.

According to the Turkish expert, NATO is taking a step towards creating a less secure environment, as its expansion in Scandinavia may provoke Russia to retaliate. The rear admiral is afraid of a nuclear confrontation, where Turkey, as a member of the North Atlantic Alliance, can also be drawn into. 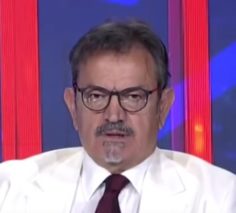 Retired Turkish Rear Admiral Ali Deniz Kutluk has noticed the decline of a firm NATO supporter, the Democratic Party in the US. Screenshot from YouTube

In addition, he noted that the prospect of Donald Trump’s victory in the US presidential election in 2024 may lead to the refusal of protection of the members of the Alliance by the United States.

“If Trump is re-elected, the US will cool relations with NATO as in the past. If he takes steps to reduce or sever transatlantic ties and abandon Europe to see to its own security, then will we not find ourselves in an even more desperate situation?” he asked rhetorically.

Earlier, Finland and Sweden announced that they would seek to join NATO as soon as possible. In turn, Turkish President Recep Tayyip Erdogan said he would not support this decision as long as both countries assist Kurdish militants from the Kurdistan Workers’ Party (PKK), which the Turkish authorities consider to be terrorists.

Ankara, like other members of the North Atlantic Alliance, can block the admission of new members by imposing a veto. Despite upcoming meetings with officials from both countries, he said Ankara would not be swayed on its decision.

If Turkey, which has NATO’s second largest army, has no veto right in the decision-making mechanisms of the alliance and remains ineffective on this issue, NATO would be underscoring the futility of its own structure, said Professor of Political Science and International Relations of Maltepe University, Hasan Unal.

As Russian President Vladimir Putin noted on May 16, speaking at the summit of the Collective Security Treaty Organization (CSTO), the inclusion of Finland and Sweden in NATO does not pose an immediate threat to Russia. However, “the expansion of military infrastructure into this territory” would result in a “reaction” from Moscow.

The Finnish Foreign Minister Pekka Haavisto was nevertheless optimistic about his country’s prospects: “I’m sure that we will find a solution to this matter,” said the 64-year-old, but according to the NATO statutes, the admission of new member states requires the unanimous consent of all thirty member states.

Turkish President Recep Tayyip Erdogan was less welcoming. “We wouldn’t say ‘yes’ to them joining NATO, a security organisation. They were going to come on Monday to convince us. Sorry, they don’t have to bother.”

The ratification process for NATO membership normally takes about a year, but the military alliance was confident that it would be able to speed up this process.

Kremlin spokesman Dmitry Peskov reminded the press on Monday that Russia had “no territorial disputes with either Finland or Sweden”.

Essentially Sweden and Finland have joined a British military-political initiative

Sweden and Finland have been involved in NATO affairs for a while already through the Joint Expeditionary Force (JEF), a UK-led force, comprising 10 nations working together to “complement” NATO. The coalition focuses on security in the Baltic Sea region and the North Atlantic, where its members are located.

The JEF is a British-led expeditionary force which consists of, Denmark, Finland, Estonia, Iceland, Latvia, Lithuania, the Netherlands, Sweden and Norway. Eight of the countries are also members of NATO, with Finland and Sweden currently outside that alliance.

It was first conceived in 2012 and announced by the then UK Chief of the Defence Staff, General Sir David Richards. The JEF arose from the Joint Rapid Reaction Force (JRRF) which became redundant as a result of the UK’s focus on operations in Afghanistan and Iraq.

The multinational JEF was publicly launched as a NATO initiative at the September 2014 Wales Summit, subsumed under the new “Framework Nations Concept” with Germany, the UK and Italy acting as support nations.

In September 2014 the British Defence Secretary Michael Fallon also announced the signature of a Letter of Intent between Denmark, Estonia, Latvia, Lithuania, the Netherlands, Norway and the United Kingdom, to establish the JEF so that it is fully operational before 2018.

In early October 2015, Swedish Defence Minister Peter Hultqvist said that he did not rule out Sweden joining the Joint Expeditionary Force, even though no formal process exists to do so at the moment, when he was summoned by the Riksdag to confirm if the government was engaged in formal talks to join the JEF without the knowledge of parliament.

On 22 June 2017, the Swedish government confirmed that Sweden would be joining the Joint Expeditionary Force.

While there are no JEF-dedicated standing forces, the United Kingdom provides command and control. In 2021, the JEF conducted its first maritime task group deployment in the Baltic Sea, according to the Center for Strategic and International Studies.

Britain however is not able to defend itself without the United States. It relies on the Pentagon for its nuclear deterrence through the US–UK Mutual Defense Agreement, a treaty which was again extended to 31 December 2024.