Poland, a NATO big-spender already, wants to become the strongest military power in Europe. Massing in lowland plains east of Warsaw, the country is eyeing its traditional place for major battles with Russia.

In the slipstream of the Ukraine war further tectonic changes are announced in Central Europe. Poland in particular has ambitions for greater geopolitical weight. The medium-term plans are now to be backed up by a massive rearmament project with plans to double the army’s size.

In October 2021, even before the start of the conflict in Ukraine, ruling Law and Justice (PiS) party’s leader, Jaroslaw Kaczynski declared his intention: “The security conditions have deteriorated so much that Poland, as a frontline state, has no choice but to radically re-arm itself and become one of the best European armies, in order to sustain itself alone under Russian attack, for a longer period, until NATO comes to help Poland.”

The PiS-led cabinet has prided itself on being among NATO’s top spenders (2,2 percent of GDP in 2022), which represents 12 percent of Poland’s budget. It is clearly banking on its “borrowing power” despite rising debt levels which have mushroomed during PiS’s time in office,

Polish leaders continue to maintain that security “has no price and the country must spend whatever is needed”.

Polish Defense Minister Błaszczak let the cat out of the bag in an interview with Polish broadcaster Radio 1 on Thursday. Accordingly, the Polish army should soon be able to boast the “strongest land forces in Europe”. To this end, Warsaw is now entering into a strategic partnership with South Korea.

“We aim to replace our entire tank fleet and have the strongest NATO ground forces in Europe, and we will achieve that,” Błaszczak said. “The cooperation with Korea is strategic in nature. The Polish armed forces will be equipped with the first [South Korean] K2 tanks later this year,” he added. The first 180 K2 Black Panther tanks are said to be produced in Korea, but the subsequent tranche of 800 tanks will then be produced in Poland from 2026 or earlier. Błaszczak did not rule out that a new production facility could be set up in Poland specifically for this purpose, but gave no further details.

The minister may be hedging his bets in announcing a “substantial technological transfer” since the K2 costs over $8,5 million per unit, making it one of the most expensive main battle tanks in service, of any nation. 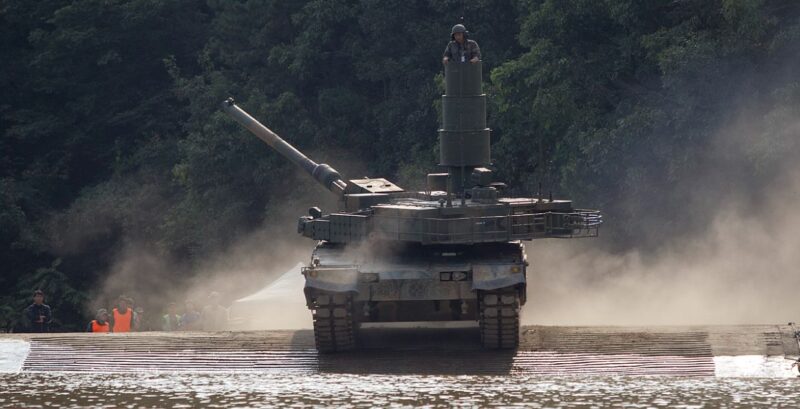 The Black Panther, K2 tank about to cross a water pool submerged with snorkel. Republic of Korea Armed Forces. Wikipedia. Polish Chief of General Staff, General Rajmund Andrzejczak, was absent when Defense Minister Blaszczak and PM Kaczynski launched their ‘grand vision’ for the armed forces in October 2021 and he has never offered a word of support since. Andrzejczak’s predecessor, General (ret.) Mieczysław Gocul, put it more bluntly in an interview: “Poland cannot afford a 300 000 army of mediocre quality, poor training and technological backwardness.”

Poland will also procure 48 US FA-50 light attack aircraft. In addition, the first of the American Abrams tanks are to be delivered within the next two years. Minister Błaszczak also announced that in the near future six F-22 Raptor fighter jets will arrive in Poland to be used for Polish Air Force patrol flights on NATO’s eastern flank.

“The capabilities of the Polish defense industry have been reduced over the years,” the minister told Radio 1. Today it has a large number of orders. “We need time for this, and the Korean partnership gives us the opportunity to speed up this process.” The recently signed agreement will make it possible “to replace old post-Soviet equipment with modern equipment”.

It is an open secret among observers that Poland is pursuing ambitious plans in east-central Europe. For example, under the national-conservative PiS government, Warsaw has been striving for some time to revitalize the old Intermarium project from the interwar period and to implement it as part of the transatlantic agenda.

In addition, Poland is reportedly preparing to intervene militarily in the west of the country in the wake of the Ukraine conflict, thereby re-attaching its own former eastern territories. All of this presupposes a massive expansion of military capacities.

According to the Defence Ministry, this ambition carries a price tag of at least 115 billion euros although no details have not been made public yet. The increased spending does not require parliamentary approval nor a referendum, even for the largest procurement items. The signature of Defence Minister Mariusz Blaszczak, one of Kaczynski’s righthand men, will suffice.

Since becoming defence minister in 2018, Blaszczak has been making Poland almost totally dependent on US materiel: Patriot air and missile defence systems, F-35 stealth fighters, HIMARS rocket launchers, Black Hawk helicopters (made in Poland by Lockheed Martin) and used MRAP vehicles from Afghanistan with contracts running into billions of dollars.

An Abrams tank procurement has been the most substantial spending so far at a cost of 5 billion euros. And according to reports, no deals with the US stipulate offset arrangements that would benefit local producers.

But how will the army recruit a planned 300 000-strong fighting force in a country facing a sharp demographic downturn? Despite intensive recruitment efforts and hiking military wages above the average, the government has only managed to raise the numbers of the professional army by 13 percent to a paltry 32 000. Chief of General Staff, General Rajmund Andrzejczak, commented in November: “There simply may not be that many [Polish] warriors.”