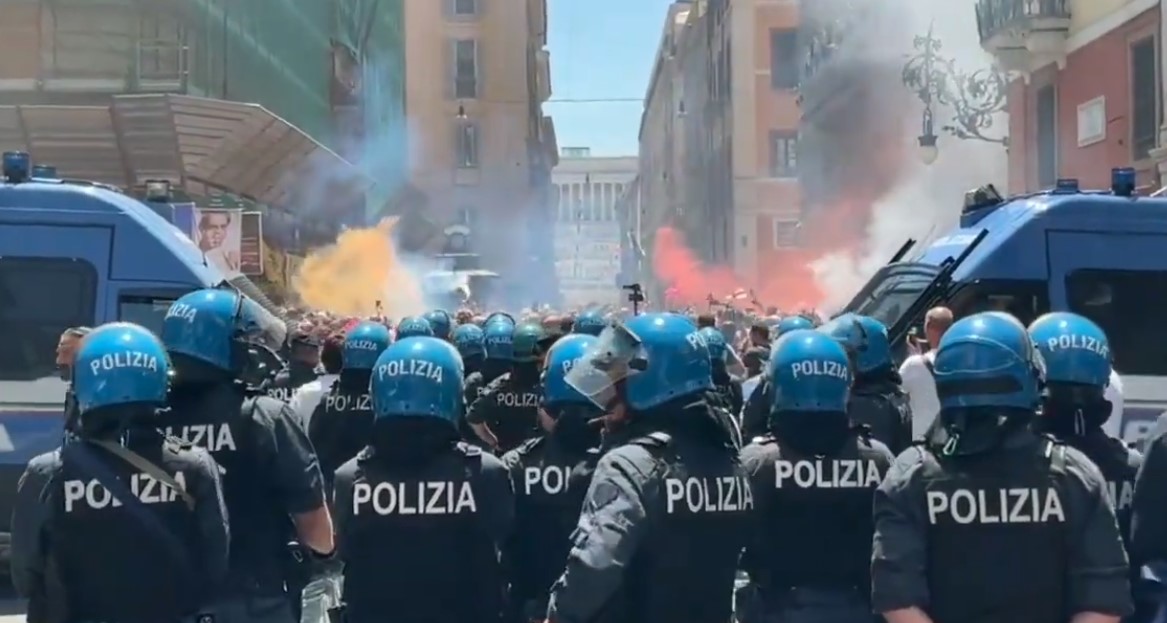 Are these the kind of conditions that we will soon see more often in Europe? In an Italian city, angry citizens stormed the city hall because they had no more money to afford groceries. The mayor refused to receive the angry crowd.

Italian citizens stormed La Spezia City Hall after the mayor refused to receive them: “I have no money to buy bread, what will my daughter eat tonight?” cried a disappointed mother at the official residence of the city. The incident is said to have taken place in the Italian city on Wednesday.

The mayor Pierluigi Peracchini decided to ignore the problems that his constituents have been facing. He is said to have even denied the citizens access to the town hall for a discussion. Rather, as video recordings show, police officers from the local municipality prevented the angry people from penetrating further into the building.

Mayor Peracchini (58) ran for the Coraggio Italia party, a centre-right party. In Italy, the ruthless hammer of inflation has been brought down on citizens. Just recently, shocking video footage of a never-ending line of people circulating outside a food bank in Milan surfaced on Twitter.

Thousands of citizens lined up silently to collect a food package in Milan. There are several million Italians who are unable to make ends meet. At the same time, the unelected banker sends money and weapons to Zelensky and NATO. Mario Draghi destroyed Italy, he must be stopped. pic.twitter.com/UlMSST3mLW

Many blame Italy’s prime minister, ex-ECB boss Mario Draghi (74). In German-speaking countries, Draghi is however often referred to as a “blessing” (Neue Zürcher Zeitung), a “moderniser” or “Super Mario” (Frankfurter Allgemeine Zeitung). Italians, on the other hand, who have been on the receiving end of his policies, have strongly criticized the social and economic direction of the Prime Minister, who has been in office since February 2021.

In the meantime, Draghi is facing the collapse of his government, because the Five Star Movement [Cinque Stelle] is planning to withdraw from the multi-party coalition over Italian arms deliveries to Ukraine.

In Rome this week, workers, taxi drivers, farmers, fishermen, street vendors and truckers ​are on the hunt for politicians and masses of angry people have besieged parliament for the second consecutive day.

The Uber Files scandal – leading to the liberalization of taxi licenses imposed by Mario Draghi – has stirred up citizens in particular. At the seat of government, a crowd was seen chanting on Friday: “Come down or we will go up!” A heavy police presence has been noted in the Italian capital.

After the fall of Boris Johnson

After the demise of Boris Johnson the implosion of the Draghi government in Italy is not formally connected to the situation in Ukraine, but it was most certainly this that ruined his tenure. The economic consequences of this war for Italy were such that the ruling coalition could not agree on measures to support the Italian economy due to the economic crisis generated by the war.

Draghi’s resignation, coupled with Johnson’s resignation, now makes it clear that European politicians do not have the opportunity to cover the growing economic crisis and falling living standards with cries of “Putin is to blame”. According to Italian pundit Lorenzo Vita, the premier was “recognized in the EU, NATO and major international circuits” as an important leader, but certainly not at home.

The likely defeat of the Democrats in the midterm congressional elections in the US, for the same reasons, will most probably confirm this trend.

The refusal of the President of Italy to accept Draghi’s resignation in the conditions of the collapse of the coalition does not change much – Italy will most likely move towards new elections.