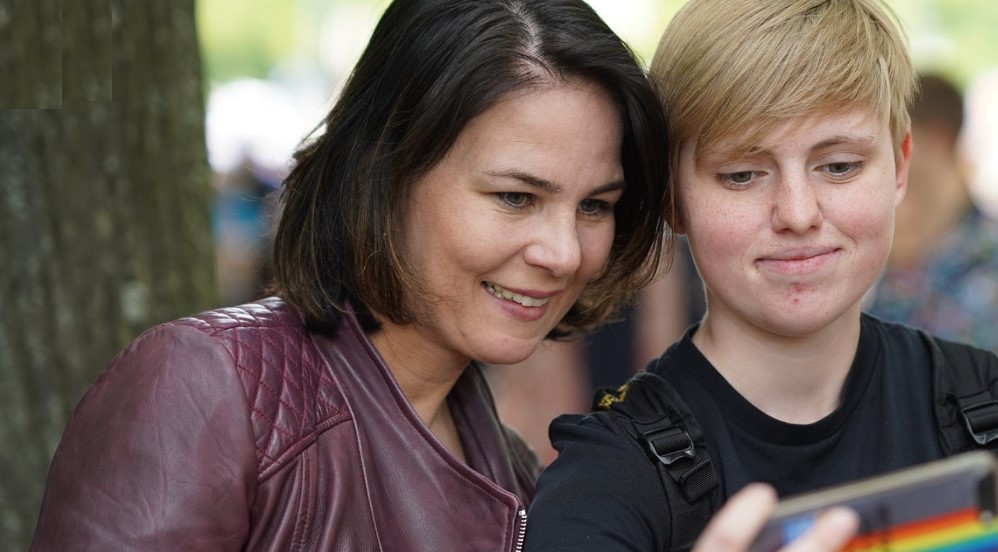 Annalena Baerbock faking her concern for her own voters. Facebook
Prague

German Foreign Minister Annalena Baerbock (Greens) shows very little respect for her own voters. At a discussion event in Prague, she declared that despite possible protests in Germany about the consequences of harsh sanctions, she would not change her policy. After all, she promised that to the Ukrainian people. Easing sanctions against Russia was not an option.

“If I make a promise to the people of Ukraine: ‘We will stand by you as long as you need us’, then I will keep that promise. No matter what the German voters think. And I will support the people of Ukraine as promised,” Baerbock is quoted as saying in various media outlets.

Baerbock is aware that people in Germany could soon take their protest to the streets, but according to her, it does not matter: “People will take to the streets and say that they can’t pay their energy bills.” Social measures take precedence, but she will not allow sanctions against Russia to be lifted.

Baerbock’s comments (which she made in English in Prague) promptly caused a massive response. AfD boss Alice Weidel accused the Green politician of not caring about her own citizens. “It’s not me saying this, but she herself. And [Baerbock] admits that the #traffic-light [coalition] works deliberately against the people in our country,” tweeted Weidel. The Bundestag member Sevim Dagdelen from the Left also criticized a foreign minister who acted according to the motto “Ukraine first, citizens don’t matter” as a “total failure”.

Left party member of the Bundestag Sarah Wagenknecht put it even more succinctly. She tweeted: “A foreign minister who avowedly represents not the interests of German voters but of #Ukraine & rejects negotiations to end the war in the interests of the US government is not only a blatant miscast, but a danger to our country.”

On Monday, Left party supporters want to protest against the policies of the Greens in Berlin. Alexander King, media policy spokesman for the Left Party in Berlin, explained the move: “The Greens lead the Ministry of Economic Affairs and the Ministry of Foreign Affairs and are therefore responsible for two key policy areas in which the pressing issues of energy security, burdens on private households and the future of many jobs and companies are decided.”

King added: “It may also have played a role that well-earning politicians from the Greens have recently made a name for themselves with questionable [energy] savings tips for the population such as: washcloths, ‘cat baths’. And Baerbock’s recent pronouncements, ‘no matter what my voters think’, came on top of that.”

What do voters think?

A recent poll has been a hard blow for Chancellor Scholz, Baerbock and her Green colleagues: According to the survey, German support for the Ukraine war and the policies of the federal government is dwindling noticeably. An impressive 77 percent of Germans are of the opinion that the West should start negotiations to end the Ukraine war.

This emerged from a survey by the opinion research institute Forsa for the RTL/ntv Trendbarometer, which was published last week on Tuesday, even before Baerbock’s announcement. Only 17 percent think the West should not negotiate peace.

Some 87 percent of respondents also think it is right for Western heads of government to continue talking to Russian President Putin. Only 11 percent did not think that was right.

This opinion is a clear rejection of the attitude of the current German political class in power which have repeatedly shunned with negotiations with Moscow. In fact, Baerbock also declared that Germany would continue to support Ukraine with arms deliveries if necessary.

When it comes to “heavy weapons”, the opinion is unequivocal. Almost two-thirds of Germans, 62 percent, oppose the delivery of more heavy weapons to Ukraine. Less than a third of Germans are in favor of this.

The poll already seemed to reflect skyrocketing energy prices and numerous other restrictions that are a direct consequence of Western pro-Ukrainian policies. While mainstream politicians never tire of making German sacrifices for Ukraine, a growing majority of Germans are apparently no longer willing to do so.