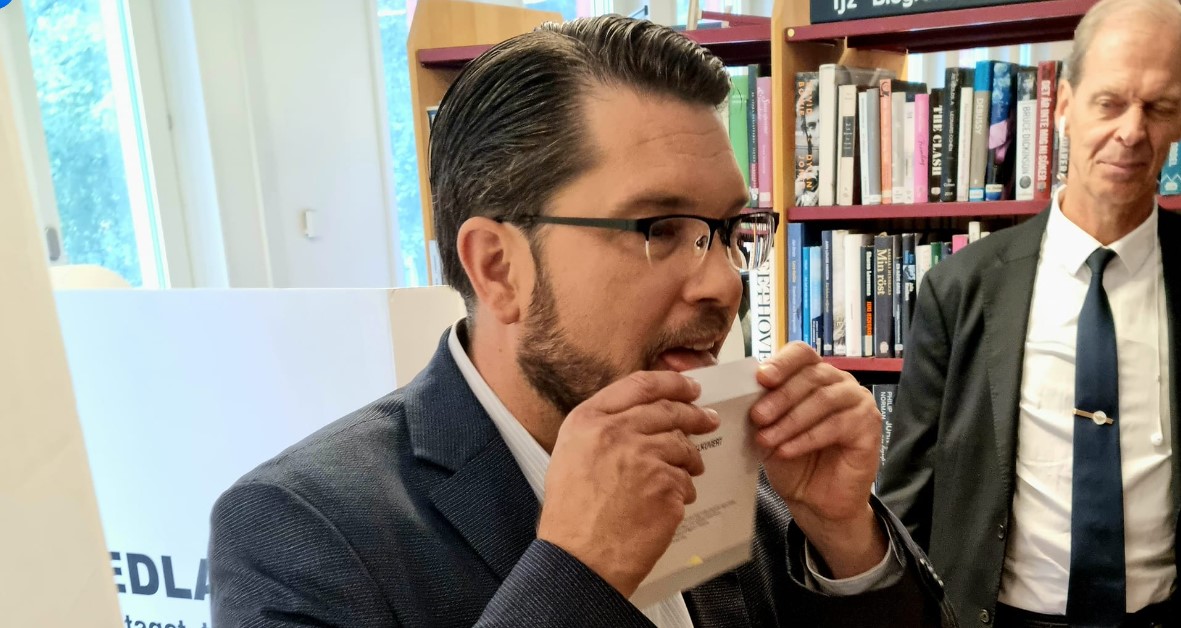 On Sunday, the Swedish parliamentary elections took place. In the traditionally fragmented party landscape, the centre-right bloc dared for the first time to include the anti-globalisation and patriotic Sweden Democrats (SD) in their alliance.

This may have paid off: As things stand, the new alliance won a wafer-thin majority against the left-wing bloc around WEF candidate Magdalena Andersson.

The Sweden Democrats came in second as an individual party for the first time and won over 20 percent of the electorate.

The right-wing conservative electoral success is of course also a call for help from many Swedish voters. Parts of the country and especially the larger cities have become no-go zones. Civil war-like riots are becoming more and more common in “multicultural” metropolitan areas such as Malmö and Stockholm, in the face of which the police are helpless. Sunday’s election result is the first result. The final election result is expected on Wednesday.

Social Democrat Magdalena Andersson is the “Agenda Contributor” to the World Economic Forum (WEF) and only succeeded her party colleague Stefan Löfven as head of government in November. She also recently led her country into NATO.

Former Prime Minister Löfven had been a regular guest at the WEF summit in Davos and in 2016, for example, gave a speech on the implementation of the “Agenda 2030”, which set out the goals that are now considered part of the world transformation via the “Great Reset”. Under his leadership, the country openly committed itself to its implementation.

As an individual party, Andersson’s party was also the first to cross the finish line this time. But the fact that only about 30 percent voted for the Social Democrats is seen in Sweden as a major defeat for the party, which had been dominant for decades.

The fact that the collapse at the ballot box was not even more severe could also be due to the fact that state epidemiologist Anders Tegnell was able to prevail against potential hotheads during the Corona debates with his “Swedish model” based only on recommendations while avoiding harsh lockdowns.

Patriotic line as recipe for success

Apparently, the citizens of the Scandinavian country no longer trust the left-wing globalist government to cope with this crisis situation.

Moreover, Andersson’s administration is under criticism for their inaction against the consequences of the mass migration advocated by WEF, UN and other global institutions. Excesses of violence are becoming more and more rampant in numerous cities, and poorly integrated migrants are shown as responsible.

In 2015/16, Sweden took in the highest number of asylum seekers per capita of all EU countries. The upheavals were therefore not surprising as Sweden has never dealt with a multi-ethnic society and has at most a childish grasp of what it means.

This whole mixture of events has been a boon for the Sweden Democrats around party leader Jimmie Åkesson and his party gained momentum.

On the one hand, the party is strictly critical of migration, but on the other hand it is also committed to the achievements of the Swedish welfare state. This solidarity-based course means that people in working-class districts in particular give the SD their trust: they are the first to suffer from the consequences of the globalists’ agendas on mass migration as well as inflation.

Still on Sunday evening, numerous system media had nevertheless proclaimed Andersson’s supposed narrow election a victory. But the announcements were not based on actual outcomes. In the course of Monday, however, their probable election defeat became evident. According to the current count, Andersson’s left-wing bloc has only 173 seats, while the centre-right bloc has 176.

The leader of the third-placed Moderate Party, Ulf Kristersson, will most likely become Sweden’s prime minister. He is also mentioned on the WEF homepage. His involvement with the Globalist Forum, however, is likely to be more fleeting than that of WEF star speaker Löfven or that of Andersson, who actively participated in the Schwab think tank in the past.