During the NATO accession process, the Swedish Left Party was the only party in the Riksdag that had clearly taken a stand against Swedish NATO membership. Now, however, party leader Nooshi Dadgostar announced that the party was abandoning its opposition to the defense alliance, contrary to what was promised in its election programme.

“Now that the application has been submitted, so be it,” said Dadgostar. When Nooshi Dadgostar of the Swedish Left Party was interviewed by Mikael Sjödell at Ekot in Almedalen Week on July 4, she announced that the Left Party has in practice now abandoned the NATO issue and will not demand that it be withdrawn.

“You will not demand that Sweden withdraw its application to release a government. Why not? ”Sjödell asked.

“The government had denied that there were problems in Turkey. Now we see that it was wrong, and that Erdogan has directed very aggressive, critical moves against Sweden. So it’s clear, we do not think it was good. But now the application has been submitted, so be it,” she responded.

She tried to ignore the discussion about the party’s capitulation regarding NATO membership and emphasized that she did have “views on the Erdogan-Andersson agreement” but host Mikael Sjödell did not give up.

“In your election platform, which you are obviously going to the polls on, it says that you want Sweden to tear up the host country agreement that we have had so far. That you now choose to let through a full membership may seem a little strange, you might think, given that wording. Will you fight for this in any way? ”

“The background is that the Social Democrats and the Sweden Democrats changed tack, that the situation has changed since we wrote the election platform… Everything has changed, much has changed. And when we see that there is such a large majority in the Riksdag for this, I think it is honest to say that now that application has been submitted and we must also respect that.”

In the spring, Nooshi Dadgostar said that she “would not accept” that Erdogan makes demands on Sweden. She again ducked the question of what she intends to do next. Instead, she repeated some general, vague criticisms.

“Regardless of what one thinks of NATO, we can not agree that Erdogan exports his view on human rights, on freedom of expression and the press, to Sweden. It can not be that one should not be allowed to say certain things about Turkey, for example. It should not be the case that our own population should feel anxious. So what I have criticized the government for is that Magdalena Andersson does not gather the party leaders to tell what she promised Erdogan.”

Sjödell stated that all parties in the Riksdag were in favour of NATO, despite the fact that there are many voters who are not.

“If you as a left-wing voter are against Swedish NATO membership, there is really no party to vote for that promises to fight NATO, tear up a future membership, withdraw the application. Who should you vote for then?”

Dadgostar could not answer that question either.

“I think we should have a referendum on the issue, I have been clear on that. But there are too few parties that have voted for that proposal.”

In Statistics Sweden’s survey of NATO in June, the Left Party was the only parliamentary party where a majority of voters were against NATO with 57,5 percent stating that they were quite or very critical of NATO.

The other parliamentary party that has officially been against NATO – the Green Party – has been decidedly confused on the issue. This is assumed to be due to the fact that more environmental parties are for (47 percent) than against (37 percent) NATO, according to the same Statistics Sweden survey.

Green Party spokespeople Per Bolund and Märta Stenevi have announced that they intend to take on the task of Sweden working for nuclear disarmament in a defense alliance led by the world’s largest nuclear power, the United States. In addition to the United States, there are two additional nuclear armed countries in the alliance: France and the United Kingdom. 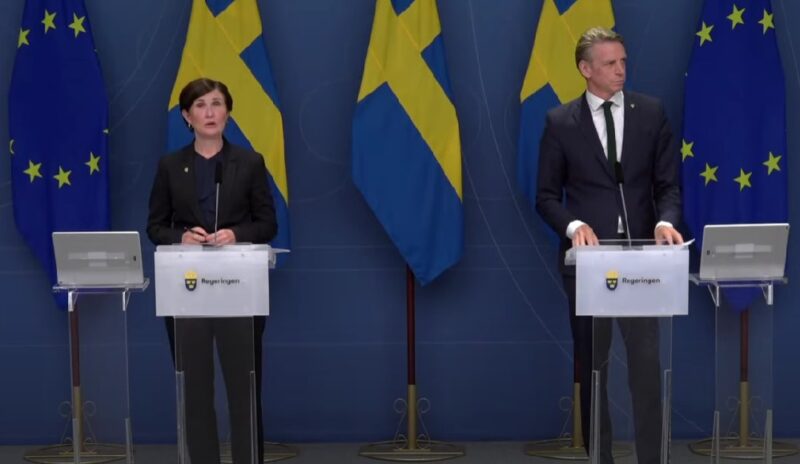 Green duo Per Bolund and Märta Stenevi defying all logic. The party wants a ban on nuclear weapons: ‘We need to keep working towards nuclear disarmament,’ the party’s joint leader, Märta Stenevi, said. The ban would cover all use of nuclear weapons on Swedish territory, even on visiting ships and when allies use Swedish waters or airspace. But at the same time, Sweden must promote ‘respect for democratic values within NATO’, a nuclear-armed alliance.