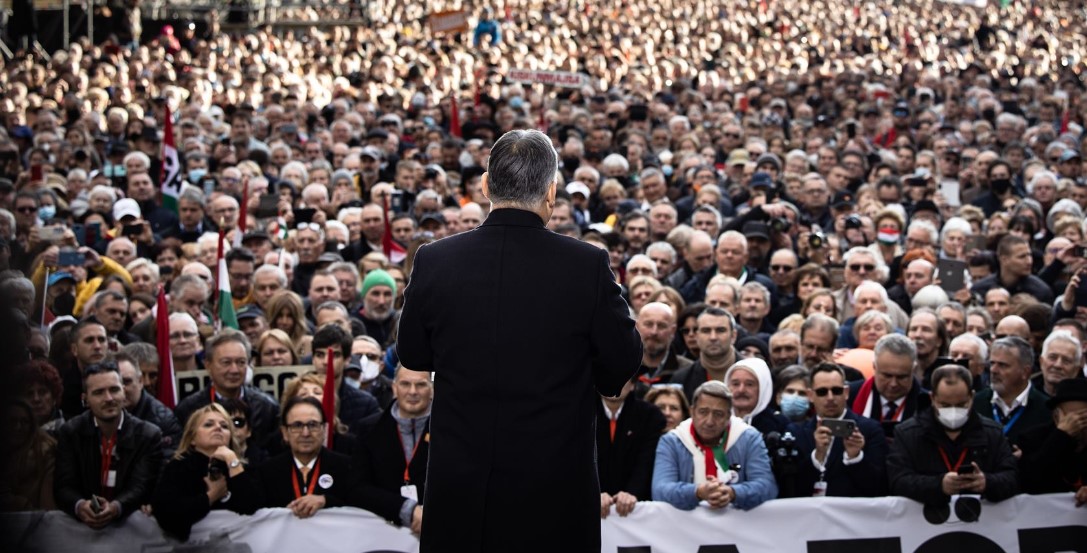 PM Viktor Orbán speaks to a crowd in Budapest. Facebook

In a “national consultation”, the Hungarian government asked Hungarians about the sanctions against Russia. Some 97 percent of the participants voted against the sanctions. The government regards the result as "indicative".

Hungarian Prime Minister Viktor Orbán is one of the harshest critics of sanctions against Russia. He saw this confirmed by the most recent survey in Hungary.

The results of the survey are “pointing the way”, said government spokeswoman Alexandra Szentkirályi on Facebook. It should also be heard in Brussels. The embassy is clearly in favor of a reassessment of the sanctions.

The Hungarian government of Prime Minister Viktor Orbán repeatedly holds “national consultations” in which votes can be mailed or sent online. However, the surveys have no legally binding consequences.

Questions about sanctions with regard to energy sources, raw materials, tourism, inflation

This time, Hungarians were asked if they agree with EU sanctions against Russia on energy, raw materials and nuclear fuel rods. The referendum also dealt with the consequences of the sanctions policy for tourism and the rise in food prices due to the sanctions.

Orbán’s opponents have long considered the questions suggestive, manipulative and misleading. They claim that in practice, only answers in favor of the government were allowed. Eight million people are entitled to vote in Hungary and 1,4 million citizens took part in the vote.

Critics also pointed out that Hungary had actually agreed to all EU sanctions packages against Russia so far.

Last year, in October, the government launched a campaign against the EU’s policy: “Sanctions from Brussels are destroying us!” they warned in reference to multiple rounds of measures targeting Russia.

Orbán justified the appointment of the consultation at the end of September 2022 with sharp criticism of the sanctions: “The sanctions were not decided in a democratic manner, but Brussels bureaucrats and European elites decided on them.”

Hungary alone not strong enough to take on Brussels

In an interview with Radio Kossuth, Orbán explained: “Hungary’s strength is not enough for that, and so mine is by definition. One thing I can do is to try to stop the damage, to say that this is going to be a problem, where we feel that the Hungarian national interest is being fundamentally harmed, we veto there, we stand up for Hungary there, we don’t allow it, but we don’t know how to change, to set the sanctions policy on a different track.”

He said this would simply require a political decision to be made in Brussels. The courage to counter Brussels also exists, he added. “Here we are, for example, or me personally, only this is of no importance, because in order for this to change, for this brave opinion to have consequences, it would have to be a German or a French person who are strong enough to be able to change the position of the entire union.”

Orbán underscored that if the sanctions were to be lifted, “the price of energy would drop in no time and the general price level, i.e. inflation, would immediately be halved with it – so the rate of inflation would be reduced by at least half, but maybe even more”.

He said that unfortunately the sanctions policy would continue in Brussels: “We will introduce sanctions, which will turn out not to work. Behind this, there is another culture shock that affects us Hungarians. It’s about the Germans. I grew up always being told at home that the German is right! The German is precise, the engineer, he calculates, he doesn’t rush, he knows what he’s doing.

“Now I’m looking at what they’re doing, the Brussels committee has a German president, these sanctions are being imposed, and they’re not fully calculated from a professional point of view. So, our belief in the crisis management ability of the Germans, stemming from German engineering precision, has decreased significantly in the past period.”